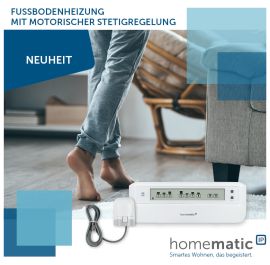 Leer, 23 May 2019 – The new generation of motorised underfloor heating products for individual room control is now available from the European smart home market leader eQ-3 [1]. With the solutions presented at ISH 2019 for the first time, individual heating circuits are constantly controlled with motorised drives. Compared to the thermal drives used for the valves of the heating circuit up to now, the new solution from the Homematic IP product range uses 100 to 200 times less electricity for a typical family home and therefore saves between 50.00 and 90.00 euros. This means that the purchase pays off in just a few years. The fact that heat can be continuously retrieved due to the constant control of the heat generators is also unique. It permits the cycles of heat generators to be avoided which in turn lowers the energy consumption of the heat pump and increases its lifetime.

The underfloor heating actuator (“FALMOT”) for up to 12 heating circuits, the motorised valve drives and a wide range of wall thermostats are part of the open Homematic IP platform. Bosch/Buderus was acquired as the first OEM, which had already presented the solution at its trade fair stand at ISH 2019 in Frankfurt am Main. FALMOT can be integrated on the basis of the same interfaces and software components – published for Homematic IP – which simplifies the work of software manufacturers, system integrators and OEM in equal measures.

Until now, floor heating in which individual radiators were controlled with thermal drives were state-of-the-art. These are heated inside by electricity, whereby a gauge is pressed down in the valve to control the flow for water-based floor heating. From the thermostats, the thermal drives are used as an ON/OFF positioner with a pulse width modulation. For example, the valve is controlled in a cycle of 15 minutes during which the valve is opened for a specific duration and then closed for the rest of the time. Electricity consumption is 1-3 watts per valve, 1.5-5 watts during opening and even more for some manufacturers. Fraunhofer measured an energy consumption of less than 2 KWh for the motorised floor heating, i.e. electricity costs of less than 0.60 euro. And this amount does not apply for one but 12 drives at the same time.

The motorised drives are constantly regulated in FALMOT. This means that valves with the drives are further opened or closed again according to the actual energy consumption of the room. Compared to the previous ON/OFF controls, the heat from the generator is also permanently absorbed with this. Heat pumps do not reach their indicated efficiency values if they need to constantly switch on and off, i.e. if they run in cyclic operation. The motorised drive resolution is only 0.8 μm, whereby a cycle can be avoided in the seasonal transition period with lower flow amounts.

As for the Homematic IP radiator thermostats, the FALMOT also offers thermal balancing as an innovation. Until now, hydraulic balance sought to balance the heat quantities required for the room and emitted by the heating system by balancing the flow amounts, feed temperature and water pressure, which is where the name comes from. A theoretical day at -14 ⁰C is used for this. In the purely mechanical individual room control procedure from this period, the maximum flow values of the valves are set, i.e. reduced, to achieve even heating of all rooms. In contrast, Homematic IP uses the possibilities of modern microcontroller-based control algorithms which would not be mechanically possible. Instead of a simple P controller, a digital PID control algorithm is used which has been supplemented by an adaptive control element which works over several days.

The benefit of thermal balancing in radiators is that it is performed completely automatically, i.e. without configuration and continuously for each day at any temperature and in any weather. In comparison, the thermal balance behaves in relation to the hydraulic balance on the radiator in the same way as a modern injection system in a car with a mechanically controlled carburettor.

Smart home – as soon as the customer wants it

With the proven secure wireless technology certified by VDE from Homematic IP, floor heating solutions can be created cost-effectively since procedures such as creating slots and laying cables are no longer necessary. The devices can be commissioned on the construction site without an Internet connection or Central Control Unit, making “stand-alone” operation possible. FALMOT and wall thermostats can be simply integrated into the Homematic IP platform at any desired point in time. Only an affordable Homematic IP Access Point (HAP) is required which needs to be taught-in for the products. The configuration is particularly easy to perform, via smartphone. This means that heating profiles or holiday periods are particularly easy to enter. There are no extra fees for the use of smartphone app and the Homematic IP Cloud and they are used completely anonymously. Alternatively, FALMOT can also be controlled with the CCU3, the smart home Central Control Unit for professionals or the Central Control Units of various OEMs and therefore locally controlled in home networks.

The list price, including VAT, of the 12-channel FALMOT is under 200.00 euro and the drives are cheaper in the list price than most thermal drives despite the innovative technology. The wireless wall thermostats have a list price between 29.95 and 49.95 euro and can also be integrated into the 55 mm range of various switch manufacturers.

If need more informations on this topic, please take a look on our press area: