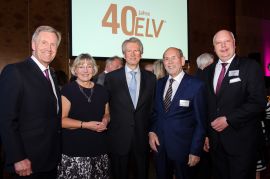 Leer, 13 May 2019 – On 10 May, the ELV group celebrated its 40 year anniversary in the Forum Alte Werft within the former production plants of Meyer Werft in Papenburg. With over 1,000 employees, the internationally operating ELV/eQ-3 group is one of the innovation and technology leaders in the smart home and consumer electronics sectors. The celebrations took place in private rooms in the presence of former Federal President Christian Wulff with 120 invited guests – mostly Professor Redeker's companions from the worlds of politics and business. The former Economics Minister of Lower Saxony Walter Hirche honoured the founder and group Board Member Professor Heinz-G. Redeker for 40 years of innovation and special development work in the former economically weak region. The importance of smart technologies in Homematic IP for the process of digital transformation in buildings was clear in the speech of futurologist Dr Bernd Flessner.

At the start of the ELV anniversary celebration programme, the owner of Meyer Werft Mr Bernard Meyer invited the guests to a factory visit to Meyer Werft, which - as for ELV - is a pioneer for innovation and technology in Lower Saxony. The former Economics Minister of Lower Saxony Walter Hirche opened the official event which followed. He recalled that the Leer region was one of the areas with the highest unemployment in Germany when ELV was founded. Businessmen such as Professor Redeker have contributed to significantly improving the unemployment rate which is now one of the lowest in Germany. “The competitiveness of the Lower Saxony economy can only be maintained and developed by innovative products. Due to its innovativeness and an ever-present company spirit, the ELV/eQ-3 group is an extremely successful example of the technological and business location of Lower Saxony,” said Mr Walker Hirche. As a second speaker, Dr Bernd Flessner from Friedrich-Alexander University Erlangen-Nuremberg gave a talk on the digital transformation process and trends in smart technologies.

After ELV was founded in 1978, the foundation stone for the group was laid with the ELVjournal presented in February 1979. The ELVjournal quickly made a name for itself in the electronics press and continues to impress readers today with a range of high-quality switches and devices presented as a kit. The ELVjournal developed into one of the highest circulation specialist magazines for applied electronics after only a few years and has held this position until now. In addition to the initial focus of kits for semi-professional laboratory devices, the ELVjournal still represents one of the innovation and technology leaders in Germany. The first solution in home automation was offered in 1979 in the form of computer timer CT2000. The pioneering role was continuously developed with solutions such as the first private branch exchange for private households, the first wireless clock for the private sector, least-cost telephone routers and the first wireless weather station.

In parallel to the ELVjournal, ELV developed into an innovative, pioneering specialist electronics shipper which is still one of the leading providers in Germany today despite Amazon and Co. In addition to the offer of kits, demand for the same proven solutions available as ready-made devices quickly ensued. The foundation of ELV as a manufacturer was laid. With competence in technology and sales and in the early phase of home automation, the path was mapped out for ELV to quickly become the leading company firstly in Germany and then in Europe. At its peak, over 200 different smart home devices were offered based on open FS20 technology. A variety of other companies have combined their own products with FS20.

In 2007, eQ-3 AG was spun off from ELV – then operating as an AG – and the new company took over all activities as the manufacturer and increased the sales by more than tenfold. With Homematic, the first bi-directional home control system was presented in which communication of all devices was cryptographically assured. The profit of large OEM customers such as RWE / innogy, Telekom with Qivicon, Bosch and various others has contributed to the growth of eQ-3 in the smart home sector as well as the prominence of smart home in the whole market. eQ-3 is the pioneer for home control based on IPv6, the next generation of the kernel log of the Internet, making a clear mark within the current multitude of offers for the smart home standard. Today, the core is formed by more than 200 devices which are all compatible with each other. More than 30 million wireless smart home devices from ELV/eQ-3 are located in more than 1.7 million households. The renowned market research company Berg Insight recently selected eQ-3 as the European market leader [1] for the fourth time in a row.

In addition to the wireless solution in Homematic IP, with Homematic IP Wired eQ-3 also offers a bus-based system which takes the state-of-the-art in house and building technology forward by a quantum leap. One unique selling point of the wireless and bus solution in Homematic IP is the security thanks to the communication during operation. It is also authenticated and encrypted during installation and the protocol, IT and data security is certified by VDE. The cloud solution with the smart phone app which can be operated free of charge and anonymously (which is optimal for data protection) with the Homematic IP devices is also exemplary. The user does not need to create any external emails, user IDs or passwords (all personal data remains with the user). An additional element in the success of Homematic IP is the firm commitment to availability of Homematic IP products and software until the end of 2030, which is unique in the industry. This pledge is particularly credible due to the fact that ELV has also been supplying FS20 devices for more than 25 years and that these can also be used in conjunction with Homematic and Homematic IP. “This is significantly different from suppliers who opt for standards in which new incompatible versions sometimes appear more frequently than the rate at which customers need to exchange the batteries of Homematic IP”, clarifies Bernd Grohmann, CTO and Board Member of eQ-3 AG.

Design and product development is based at the company headquarters in Leer with more than 90 developers. ELV started manufacturing in China in 1991 and has operated a factory in Shenzhen since 2001. In 2008, eQ-3 manufacturing moved into a new e-Q-3 factory built by the company itself in Zhuhai, Southern China, which is 100% owned by the group. With certifications to ISO 14001 and ISO 9001, it impresses with environmental and quality management and manufactures products with seals from VDS, VDE and TÜV-GS. “We are particularly proud that we have received the best marks from BSCI for Corporate Social Responsibility, because this fully matches our insight in terms of dealing with people in all countries,” according to Professor Redeker.

The group is 100% owned by the founder and CEO.

If need more informations on this topic, please take a look on our press area: